Horror Theater, but not exclusively

​Plays are available for production

THE CONFESSION OF JEFFREY DAHMER 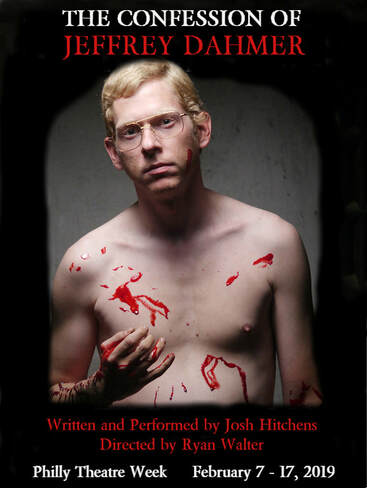 Based entirely on true events, The Confession of Jeffrey Dahmer puts you in a room with one of the most notorious serial killers of the twentieth century.  He will tell you everything.

​REVIEWS FOR THE CONFESSION OF JEFFREY DAHMER
"A tour-de-force solo show that will keep you spellbound, stunned, and sickened.  Written and performed by the astonishing Josh Hitchens . . . Skillfully directed with tension and suspense by Ryan Walter . . . Riveting, repulsive, and seductive . . . This is one stellar, award-worthy performance with a blood-curdling message no one should ignore."
- Deb Miller, Phindie.

"Oh my God, it was mesmerizing.  I know because twice I managed to look away from Hitchens in order to glance at the audience and they were motionless, stunned, rapt. Hitchens' impersonation of a man who killed human beings, ate their hearts, and kept their skulls as trophies is both moving and horrific. None of it is played for visceral kicks. His Dahmer is a very human monster, in part appalling and in part sympathetic . . . Though Dahmer tells you up front that there will be no explanations, this narrative (taken from his confession, courtroom testimony, and subsequent interviews) provides as close to an explanation of his behavior as we're going to get.  This is a terrific piece of theater . . . I'll go to see Hitchens in pretty much anything -- he's that good -- but I think this may be his best work to date."
- Award-winning author Michael Swanwick.

"From Jay Whitehead's tour de force turn as the sociopathic killer and Richie Wilcox's staging and the superb design for the show, it's clear with The Confession of Jeffrey Dahmer that everyone at Theater BSMT and Theatre Outre are at the top of their game."
- Louis B. Hobson, Calgary Herald. 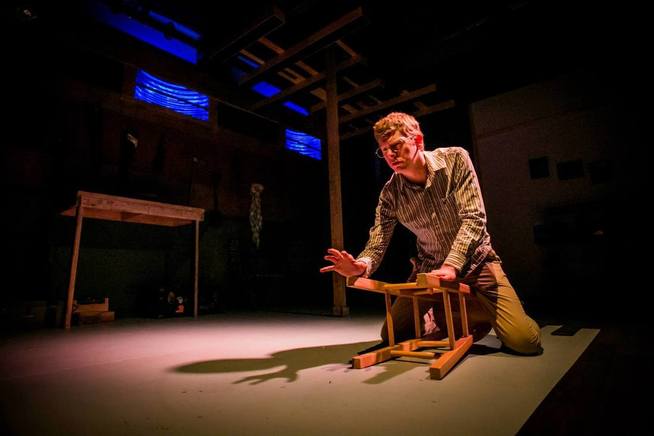 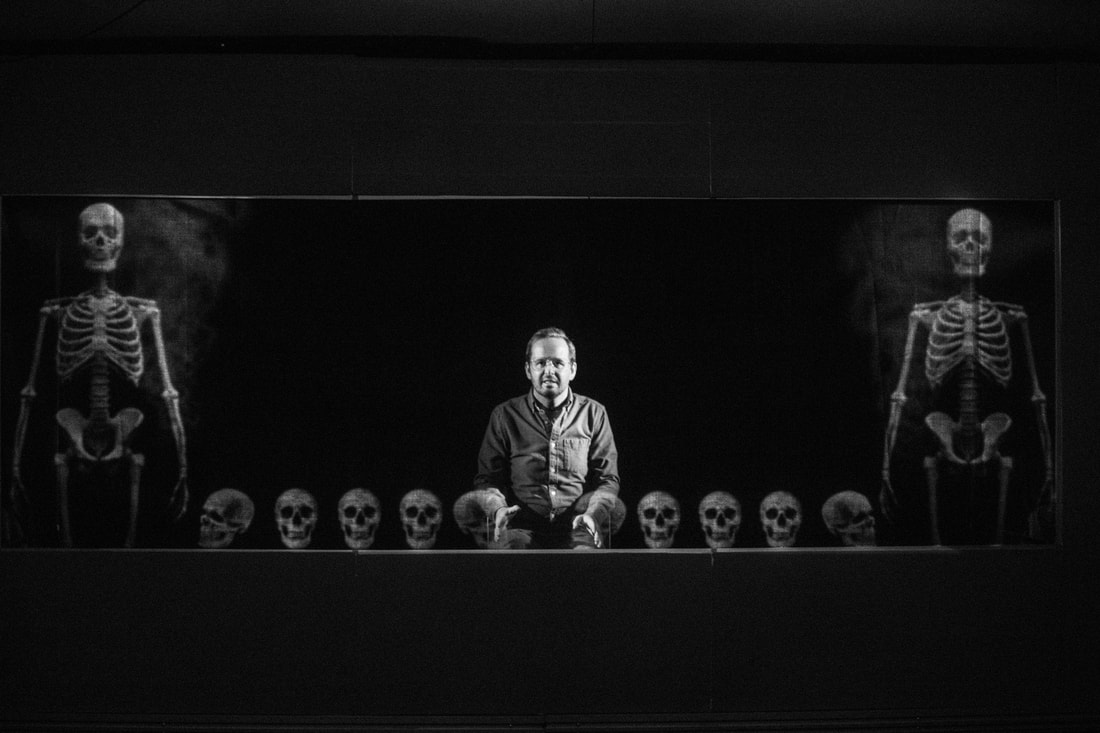 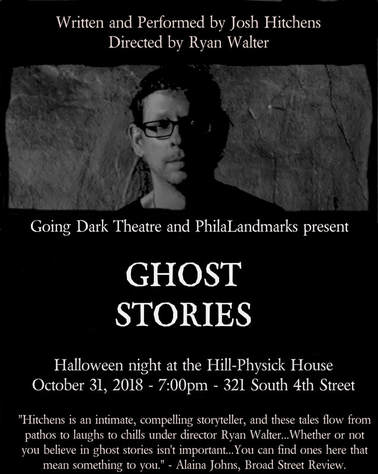 "What do you see when you turn out the light?"

From the storyteller who brought you The Confession of Jeffrey Dahmer, "Philadelphia's foremost purveyor of the macabre" Josh Hitchens presents his new play Ghost Stories.  In this chilling autobiographical solo show, Josh will tell you true tales of supernatural experiences from his past that literally continue to haunt him. A horrific and deeply moving piece about confronting the demons that haunt you in the dark.

REVIEWS FOR GHOST STORIES
"Hitchens is an intimate, compelling storyteller, and these tales flow from pathos to laughter to chills under director Ryan Walter. Hitchens describes the shadows that haunted the stairs of his childhood home, a sinister ghost who beckoned to him from the edge of the woods, and the things that followed him for seven years after one scary night with a Ouija board...Whether or not you believe ghost stories isn't important. Every well told story has a grain of truth, and you can find ones here that mean something to you...Being afraid demands a primal human bond that laughter, suspense, excitement, or even sadness never will. Maybe ghost stories aren't about fear at all, but about that underlying vulnerability and the magnetic connections that follow...Hitchens says that when you feel a presence in the dark, "It's behind you." Maybe that means its lurking, hunting you. Or maybe that means you have the choice to engage with it or not, believe in it or not, as you move forward."
- Alaina Johns, Broad Street Review. 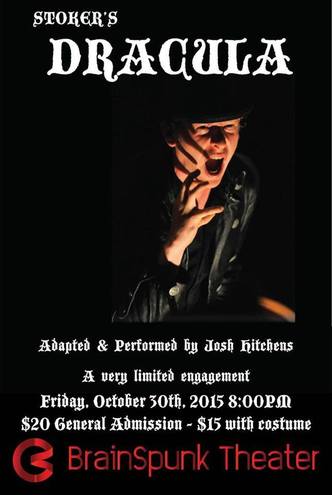 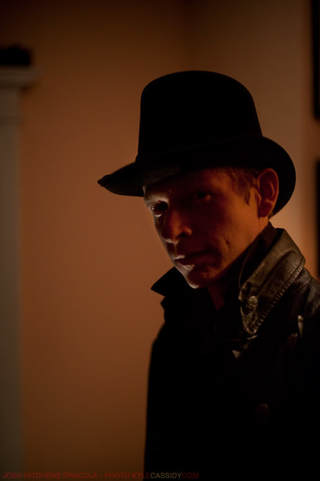 Photo by Kyle Cassidy
REVIEWS FOR STOKER'S DRACULA
"An enthralling 70 minute condensed version of the 1897 vampire classic that will leave your hair raised, your skin crawling, your spine tingling, and your blood curdled.  In a remarkable performance, Hitchens assumes all the roles - both male and female - with split-second timing . . . he brings startling movements and scary inflections to Stoker's haunting words.  The eeriness of the script is enhanced by a single spotlight that casts ominous shadows on the walls, and that Hitchens at times extinguishes, plunging the space into total darkness and allowing the viewer's imagination to run wild.  Even with the absence of light, you will be held in rapt attention by this brilliant tour de force."
​- Deb Miller, Phindie.

"You may have seen one of the hundreds of adaptations of the book, but you have never seen any quite like this.  Hitchens captures the spirit of the time and characters with a chilling fierceness.  The performance is intimate and at times intensely frightening."
- Brian Stone, WHYY Newsworks.

"The script, written by Hitchens himself, was a condensed and streamlined version of Bram Stoker's classic novel -- and it brilliantly conveyed the eerie and terrifying qualities of the original.  As an actor, Hitchens was mesmerizing, playing all the major roles with great verve and conviction, in a variety of convincing voices . . . The intimacy of the space made the story particularly compelling -- you've probably never seen an audience so rapt and still.  The effect was of being in a psychic space midway between theater and storytelling.  Which is to say, terrifying and wonderful.  Very much what it must have felt like on that long ago night outside of Geneva when Dr. Polidori first told the tale which introduced vampires to the Western canon.  It was an evening of dark glamor.  I felt privileged to be there."
- Award-winning author Michael Swanwick 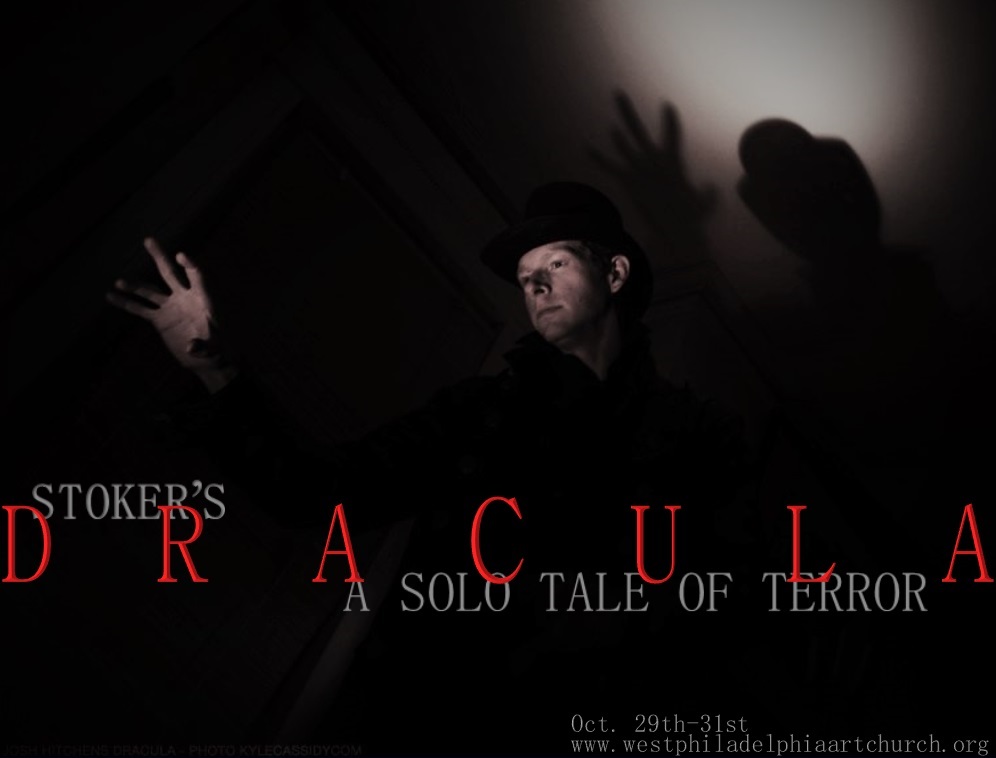 FRANKENSTEIN: A SOLO TALE OF TERROR 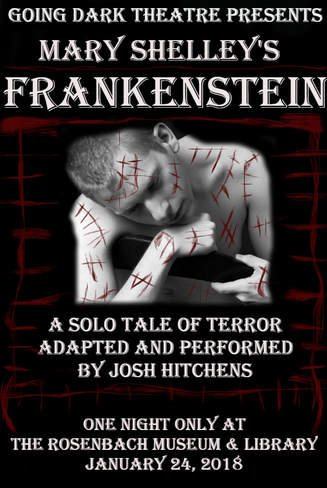 "Remember that I am thy creature.  I ought to be thy Adam, but I am rather the fallen angel.  Do your duty towards me, or I will glut the maw of death with the blood of your remaining friends."

A strange and terrifying story will be confessed to the brave few who risk an evening with a mysterious, tortured creature and it's famed creator.  This 60 minute solo performance was staged as a site-specific production in the Mutter Museum at the College of Physicians.

TRAILER FOR FRANKENSTEIN IN THE MUTTER MUSEUM
​INTERVIEW WITH JOSH HITCHENS

REVIEW FOR FRANKENSTEIN: A SOLO TALE OF TERROR
"A Frankenstein with the Hollywood additions scraped off, one that began in the Arctic wastes, revealed the self-deluded nature of Victor's ambitions, and presented the Creature with horror and unalloyed sympathy.  I cannot be the only person to leave the evening determined to reread Mary Shelley's masterpiece as soon as possible . . . a wonderfully gothic evening."
- Michael Swanwick. 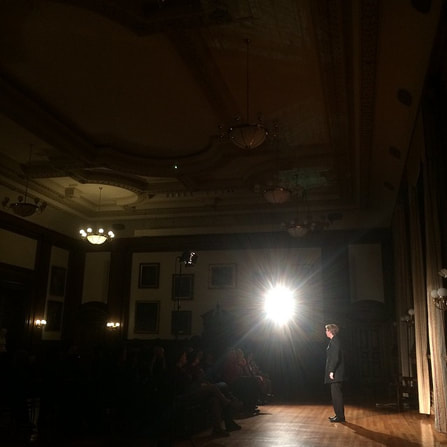 THE LEGEND OF SLEEPY HOLLOW 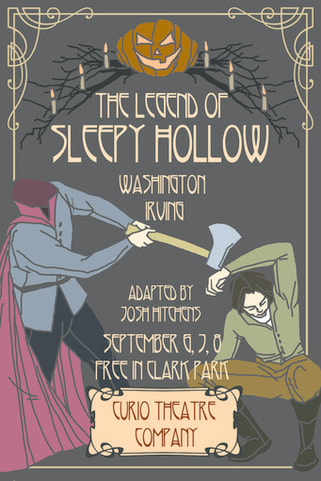 Poster by Elizabeth Gallagher
"There is a legend, a tale to be told of a sequestered glen that has long been known as SLEEPY HOLLOW."

In the town of Sleepy Hollow, there are many tall tales of ghosts.  The unforgettable legend of Ichabod Crane and the Headless Horseman comes to life in a new adaptation that combines spellbinding storytelling with live music, sound effects, and a real campfire to create a night of thrills and chills for the entire family.

REVIEW FOR THE LEGEND OF SLEEPY HOLLOW
"A full crowd of mostly families hunkered down on the grass as they listened to the story of Ichabod Crane (played by company member Josh Hitchens, who adapted “Sleepy Hollow” for stage) and his fateful encounter with the headless horseman. During the 45-minute show, Hitchens and his fellow actors, Rachel Gluck as Crane’s love interest Katrina Van Tassel and Chris Braak as his rival Brom Van Brunt, moved around the simplistic set with quiet intensity as several torches and a small crackling campfire illuminated the scene. Sound effects, provided by Eli Halpern (who played The Musician), filled the atmosphere as Crane’s story unfolded."
- Annamarya Scaccia, West Philly Local. 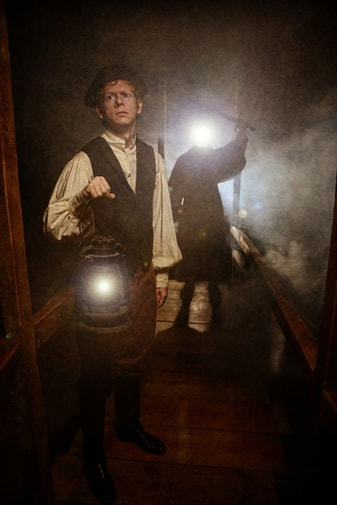 A CHRISTMAS CAROL: A GHOST STORY 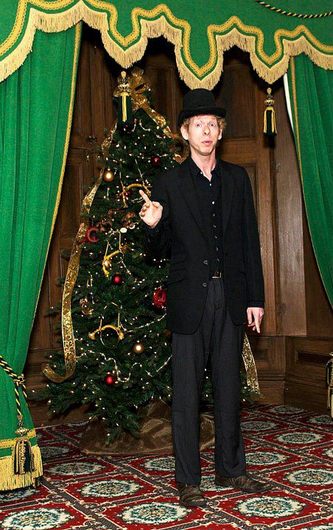 Photograph by Rowland Hetrick
"There is no doubt that Marley was dead.  This must be distinctly understood, or nothing wonderful can come of the story I am about to relate."

A Christmas Carol: A Ghost Story is a solo adaptation of Charles Dickens' classic work that runs a brisk 50 minutes.  Appropriate for all ages, this play goes back to the book's roots as a ghost story, and celebrates the power of storytelling.

REVIEW FOR A CHRISTMAS CAROL: A GHOST STORY
“Seeing Josh Hitchens perform Charles Dickens’ A Christmas Carol at the Ebenezer Maxwell Mansion is a total immersion experience – a Victorian author in an intimate and authentic Victorian setting – as well as a marvelous holiday tradition. Hitchens’ one-man show is brilliant. The audience is easily convinced that the actor has transformed himself into a young Charles Dickens, who then effortlessly takes on the persona of one character after another in a timeless tale that’s universally appealing to all ages. A simply wonderful evening!”
- Cordelia Frances Biddle, Author.

120 DAYS OF SODOM: A GRAND GUIGNOL 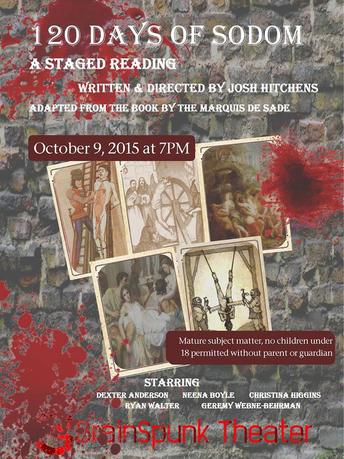 "Dear friends, prepare your hearts and minds for the most impure tale ever told."

Written in 1785 while imprisoned in the notorious Bastille, the Marquis de Sade's 120 Days of Sodom has the reputation of being the most impure tale ever told.  Four libertines wall themselves up in an isolated castle with twenty-six others, aiming to indulge their most forbidden fantasies while a Whore spins tales of her life of debauchery and hedonism.  With the darkest of comedy and steadily mounting terror, this Grand Guignol Puppet Horror Show is not for the faint of heart.

120 DAYS OF SODOM has not yet received a full production.
​

CARMILLA: A SOLO TALE OF TERROR 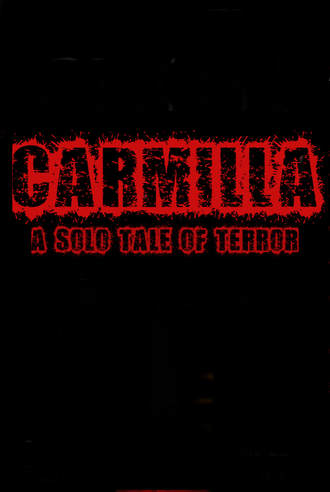 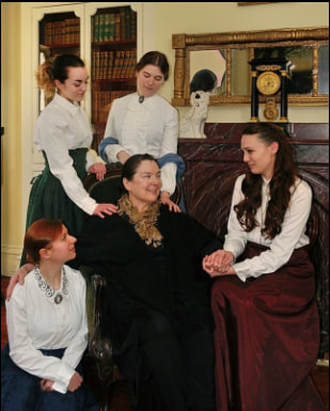 "This is the story of how four little girls became excellent, resilient, all-together astonishing women."

One of America's most beloved Victorian novels comes to life before your eyes in the Mansion's circa 1860's parlor.  Little Women is the story of the four March sisters, their mother, and the boy next door as they experience the joys and sorrows of life over an eventful decade between 1863 and 1873.  This is a full length, extremely faithful full-length adaptation of Louisa May Alcott's timeless classic.

REVIEW FOR LITTLE WOMEN
"As with the book, Hitchens and his cast stress the old-fashioned Victorian values of familial bonds and friendship...in the sweet and poetic style of the charming domestic drama, inspired by the author's own family.  Other secondary characters are discussed but not seen in Hitchens' sympathetic production, allowing the audience to focus on the main protagonists and the "humor and pathos" of their fond and formative remembrances in the up close and intimate space."
- Debra Miller, Phindie. 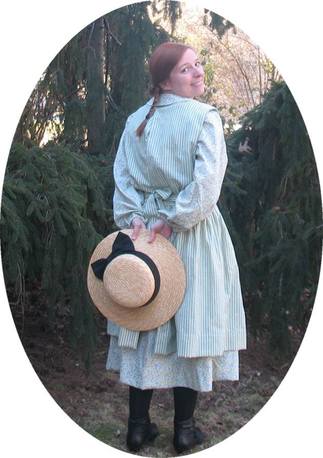 "Dear old world, you're very lovely.  And I am so happy to be alive in you!"

This full length, eight actor adaptation of Lucy Maud Montgomery's beloved novel tells the tale of the imaginative, red-haired heroine Anne Shirley as she grows up in the little town of Avonlea.  Anne of Green Gables is sure to delight children of all ages as well as adults.

Interview about the production at the Ebenezer Maxwell Mansion

THE ADVENTURES OF SHERLOCK HOLMES:
A STUDY IN SCARLET
A SCANDAL IN BOHEMIA
​THE VALLEY OF FEAR 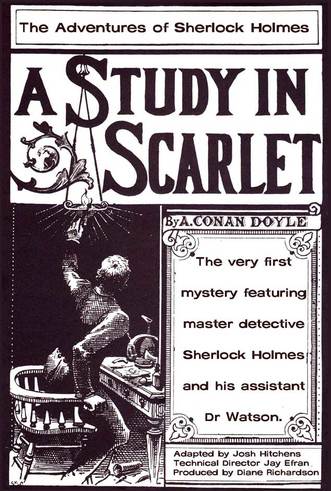 "When you have eliminated the impossible, whatever remains, however improbable, must be the truth."

This thrilling trilogy of faithful Sir Arthur Conan Doyle adaptations premiered at the Ebenezer Maxwell Mansion.  Each play runs for one hour and features between four to eight actors.  Ideal for audiences and performance groups of all ages.